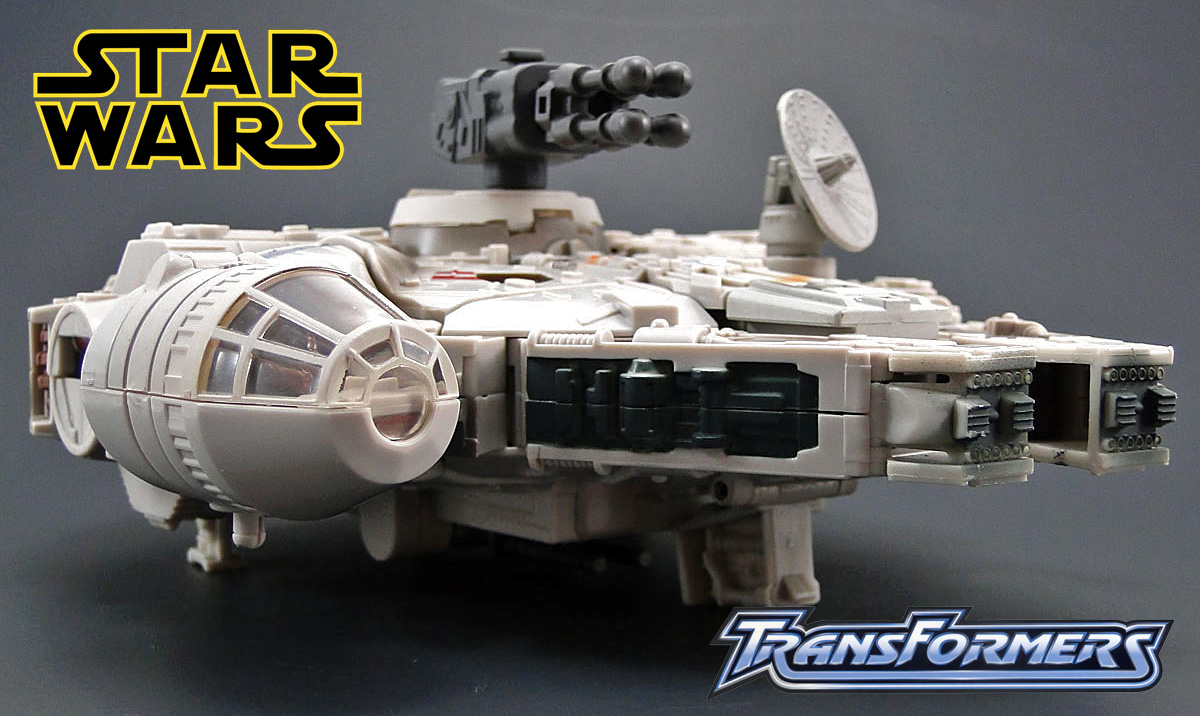 Have you ever wanted to combine Han Solo and Chewbacca robots into a battle-ready Millennium Falcon? What? Yep- it happened. To some, it’s the best of both worlds- Star Wars and Transformers. Released in June 2006, it started Hasbro’s Star Wars Transformers Crossovers series, this first of its kind combiner spaceship is totally awesome.

Surprisingly the robots are as poseable as can be expected. Both robot forms feature about 21 points of articulation. The ankles move along two planes which allow for a wide range of stable poses. Unlike the rest of the series, the Falcon robots feature lights and sounds.

Overall, this Millennium Falcon packs a solid one-two punch of speed and power. It rises above the rest of the Transformers Crossovers lineup.

Hasbro Description:
Two worlds collide – Star Wars and Transformers. Two of the greatest Star Wars characters, Han Solo and Chewbacca, combine together to form one of the most recognizable space vehicles of all time – the Millennium Falcon. Each figure stands 7-inches tall and the vehicle features lights and sounds. This unique Transformer is sure to be a hit with fans of both worlds, so get yours while you still can. With lots of electronic lights and sounds, this is a fun toy for everybody. Remember Han Solo boasting to Obi-Wan Kenobi about how great his ship is?

This robot actually talks, using Harrison Ford’s voice from the trilogy with such classic quotes as ‘I have a bad feeling about this!’ and ‘She’s the fastest ship in the fleet.’ The toy also features Chewbacca’s classic roar, and a number of sound effects from the engines, guns, and computers of the Millennium Falcon. As far as weaponry goes, these two are armed to the teeth. Han Solo’s gun has two two-pronged projectiles, and in vehicle mode, it sits on top of the ship. Chewie’s bowcaster folds up comfortably on the bottom of the Falcon in vehicle mode, and both ships transform with a few quick twists and turns.

For those of you who just want Han and Chewie to be able to sit in the vehicle, you’re covered too– micro action figures of Captain Solo and the Wookiee are included and can sit inside the vehicle’s opening canopy so they can travel the galaxy to smuggle and deliver wares for the Rebellion. With light-up engines, glowing guns, and so much fun packed into this toy, it’s great fun for Star Wars fans new and old.